You are here: Home / News / Optimization of conventional PCR reactions

Try to use high-quality, purified DNA as a template

· When the fidelity needs to be improved, a higher DNA template concentration can be used and the number of cycles can be reduced

· The length of the primer must meet specificity requirements, generally between 18 and 25 bases; when amplifying long fragments, it is best to be between 24 and 30 bases;

· When introducing a cloning site, the end of the primer should add more than 3 bases;

· Try to avoid the same base appearing more than three times in a row, and avoid using A or T at the 3'end;

· Avoid pairing bases between the forward and reverse primers, especially the three bases at the 3'end, otherwise it is easy to generate primer dimers;

· When using degenerate primers or random primers, the total amount of primers needs to be increased to compensate for the loss of yield; however, as the amount of primers increases, the specificity will decrease;

· When the template is larger or larger, or the structure is more complicated (such as human genomic DNA), you need to reduce the amount of primers to improve specificity;

· When the template is small (such as a plasmid template), increasing the amount of primers can increase the yield. 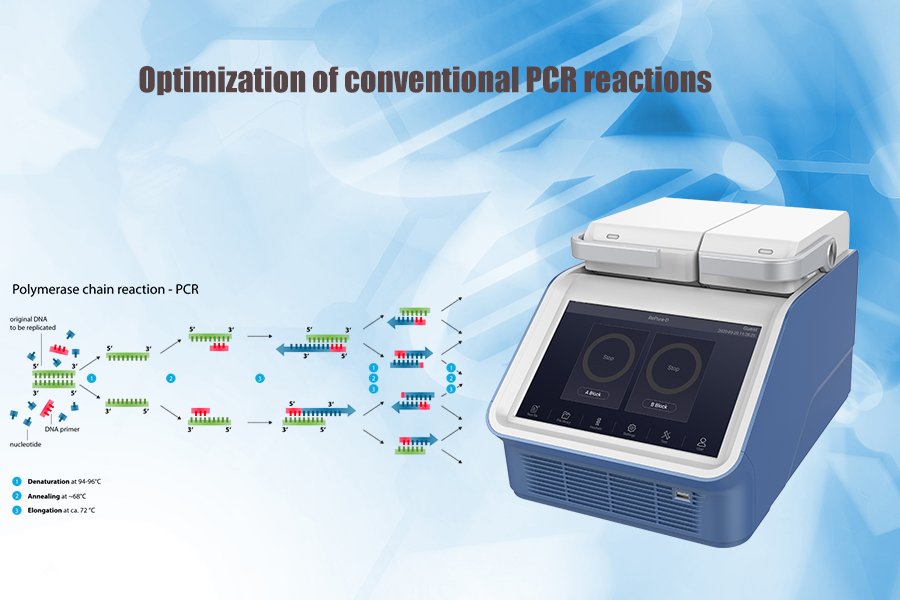 · The concentration of conventional dNTPs is 0.1~1.0 mM for each nucleotide, usually starting at 0.2 mM, and the dosage can be adjusted according to the system;

· For Taq DNA polymerase, the optimal concentration of magnesium ions is 1.5~2.0 mM;

· The optimal concentration depends on the template, buffer, DNA and dNTPs (each of which may chelate magnesium ions);

· When optimizing the magnesium ion concentration, it is usually increased by 0.5 mM gradient, up to 4 mM.

· The recommended concentration is 1~2.5 U/50 μl reaction system.

· Prepare the reaction system on ice;

· Add polymerase at the end;

· After preheating the thermal cycler to the denaturation temperature (94°C), put it in the PCR tube and proceed immediately.

· The initial denaturation is usually at 94°C, so that the DNA double strands are completely opened;

· Templates with high GC content can increase the denaturation temperature to 98°C.

· Normally, the annealing temperature is the primer Tm minus 5°C, which is between 55 and 60°C;

· Increasing the annealing temperature is conducive to reducing non-specific bands;

· The conventional annealing time is 15-30 seconds.

I. Extended temperature and time

· The extension reaction is usually carried out at 72°C.

· The extension time of Taq enzyme is about 15~30 seconds/kb DNA;

· When the product is less than 1 kb, the recommended extension time is 30 to 60 seconds;

· When the product is larger than 3 kb or the reaction exceeds 30 cycles, a longer extension time may be required.