1. The efficiency of PCR:

Powerful and accurate qPCR assays usually have high efficiency. When reporting the mRNA concentration of the target gene relative to the reference gene, PCR efficiency is very important. The ΔΔCq method is one of the most common methods for determining the concentration difference between a sample and a single reference gene used for normalization. If the difference (ΔCq) between the Cq values of the target gene and the reference gene is calculated, the ΔCq values of different samples can be directly compared. It is worth noting that the comparison of two genes must be carried out under similar amplification efficiency. However, the most common method is not necessarily the most appropriate. On the contrary, more general quantitative models have been developed to correct for differences in amplification efficiency and the use of multiple reference genes.

When publishing an article, in addition to submitting the calibration curve of each quantitative target, the slope of the calibration curve and the intercept on the Y-axis must also be provided. Differences in PCR efficiency will produce calibration curves with different slopes. As the amount of template changes, the difference between the Cq value of the target gene and the reference gene is not fixed. Therefore, the relative concentration calculated based on the fixed Cq value is inaccurate and may produce misleading results.

A Cq value greater than 40 is suspicious, and it is not recommended to report it due to its low efficiency. However, this arbitrarily setting Cq threshold is unscientific, because these values may be low (can eliminate valid results) or high (can increase false positive results). 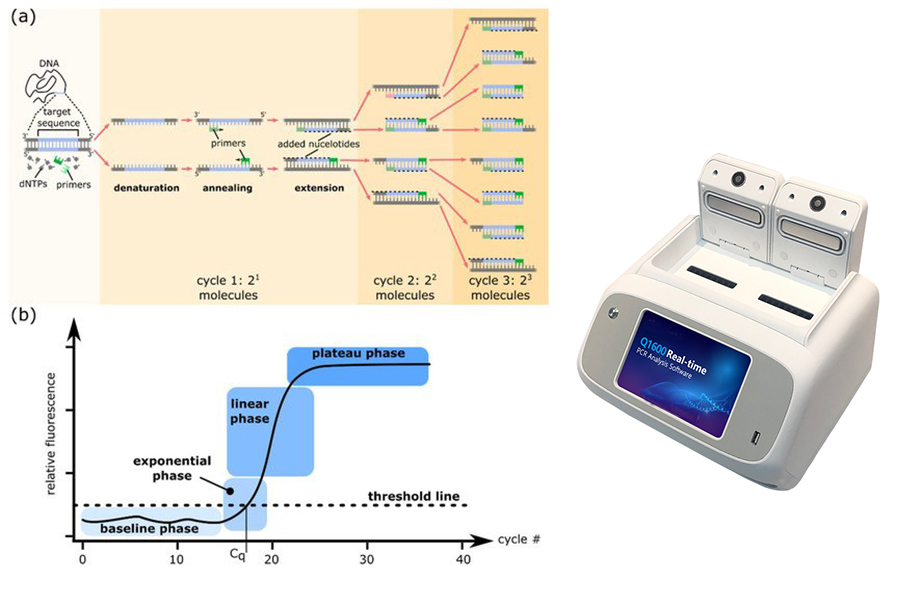 The dynamic range of the PCR reaction should be linear, that is, the highest or lowest quantitative copy number should be obtained by the average calibration curve method, and the submitted article should include the linear dynamic range. The generation of the calibration curve depends on the template used, and the dynamic range should span at least 3 orders of magnitude, preferably to 5 or 6 log10 concentration ranges. The linear interval of the calibration curve must include the quantitative range of the target nucleic acid. Since the definition of the lower limit of quantification is often confusing, the variation at the lowest concentration in the so-called linear range in the submitted article should be reported. In addition, the linear correlation coefficient (R2 value) must be reported, and it is best to provide the CI value over the entire linear dynamic range.

The detection limit is defined as the lowest concentration that can detect 95% of positive samples. In other words, if a sample to be tested with a concentration at the LOD level is repeated multiple times, the probability of an invalid result is less than 5%. The occurrence of low-copy PCR is random and limited, and it is impossible for the LOD value of a single PCR to be less than 3 copies. However, if multiple reactions are performed, accurate quantification of the low concentration range can be obtained by digital PCR. In fact, the concentration calibrator can be subjected to limiting dilution, and the failure rate and success rate of the PCR reaction can be calculated according to the Poisson distribution.

There are many factors that cause qPCR variation, including temperature differences that affect annealing and denaturation, concentration variations caused by sampling errors, and random errors. The precision of qPCR is mainly affected by concentration and decreases with the increase of copy number. It is best to perform multiple replicates, and mark the intra-assay variation (repeatability) in the form of SD error bars and the CI (confidence interval) of the calibration curve in the graph. The coefficient of variation CV cannot be used to describe Cq, but it can be used to express the variation of copy number and concentration. The variation caused by technology should be distinguished from the biological variation. Biological replication can directly lead to significant differences in qPCR results between groups or between different treatment methods. For diagnostic analysis, it is also necessary to report the inter-batch precision (reproducibility) of different locations and different operators.